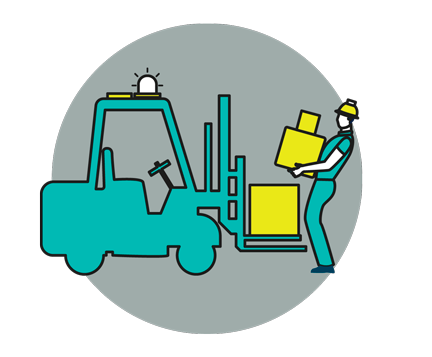 A vehicle anti-collision solution with real-time tracking and alerts for forklifts and other vehicles, so that the company’s efficiency, profitability and safety, as well as production, are not affected.

The system consists of three alarm levels: pre-warning, which alerts the pedestrian; alarm, which activates the devices (sound, light and forklift braking); and interaction range, which allows approaching the forklifts to interact with them, silencing the alarms. The alarm is fully configurable.

It also has the ability to stop or reduce the speed of the forklift if the alarm sounds, acting on the forklifts’ own systems.

Crash Stopper is suitable for both electric and combustion forklifts, for example forklift trucks, retractable forklifts, mechanical forklifts, and so on.

With this anti-collision solution, the risk is zero for personnel, equipment and the vehicle itself within industrial ORP.

Incidents in the industrial sector related to occupational accidents are currently a frequent problem. For this reason, the sector must modernise itself, seek the necessary solutions and improve both of these factors to safeguard the protection of its human and material resources.

At Cartteclab, we want to support the prevention of risks and promote safety in industry, looking out for employee welfare and ensuring minimal sick leave.

By avoiding incidents, assets remain in proper working order for longer, in addition to improving the productivity of all workers, who will feel more confident when carrying out their daily activities.