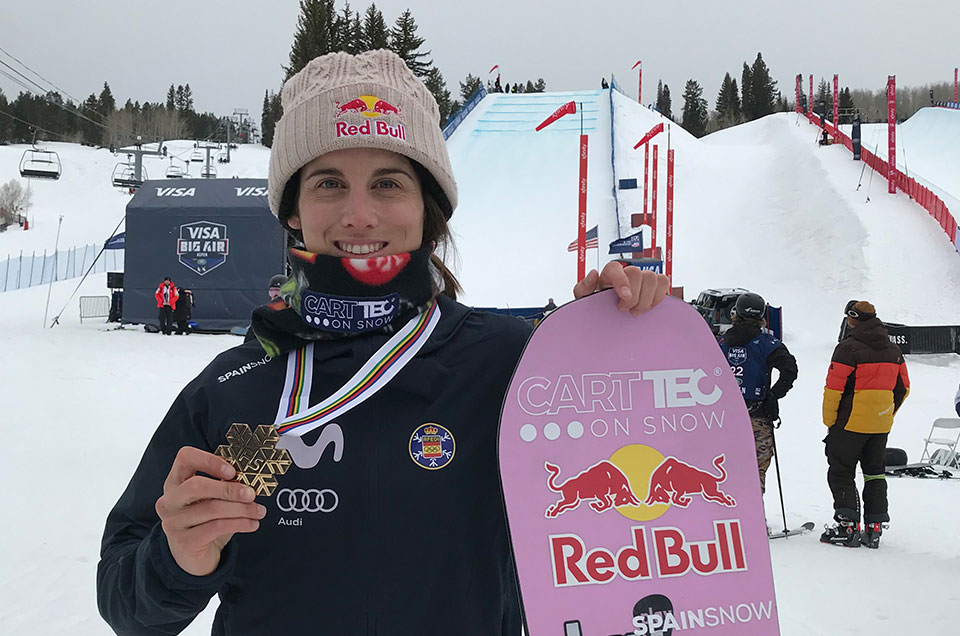 The RFEDI-Spainsnow rider won a well-deserved bronze medal in the halfpipe final of the FIS World Championships in Aspen Snowmass.

The competition started with difficult conditions due to wind and with the first snowflakes starting to drop. As a result, it seemed that the strategy to be pursued would be trying to secure the first round because of a more intense snowfall being forecast, which would make the following rounds in this three-round final more difficult.

Queralt competed in a pipe that she likes, as she had already won gold in the X Games last year, becoming the first Spanish woman to achieve such victory.

This world event made us suffer until the last minutes of it, but, luckily, the snowfall took a break in the final round and Castellet went for all or nothing, since only her and Chloe Kim – who already had the gold assured – ­were left to go, so out she went after a great performance from Maddie Mastro who seemed to have secured the silver with a last round of 89.00 points.

However, Queralt is not only a great sportswoman, but also thrives in difficult moments, fighting until the end. She proved it again, performing a third round of six tricks: Drop-in Switch, Switch-back 5, Cab 7, Cab 7, Fs 5, Bs 9 and Fs 9 that was much more technical and difficult than the Japanese Sena Tomita’s, who she managed to steal the bronze from at the last moment.

The score was a long time coming, but a final score of 87.50 confirmed the medal as the judges valued in particular the amplitude, variety of tricks and their difficulty, giving importance to the Drop-in Switch, which was only done by her and Scotty James (men’s halfpipe final), as well as to her two final tricks: the back-to-back combo composed of a Backside 9 and a Frontside 9.

“I’m super happy. Really happy, to tell the truth, it has been a very complicated and nerve-wracking final. I didn’t manage to nail the first or the second round, so in the third and last one it was all or nothing”, said Queralt.

“I went out practically shaking, but I knew I could do a good job. I went out with a lot of nerves and pressure, but I went for it and I’m very excited to have won the medal and made it to the podium …”.

From Carttec, we celebrate with her that she achieved a place in the podium and we are proud that she represents us all over the world. Congratulations Queralt!!!!