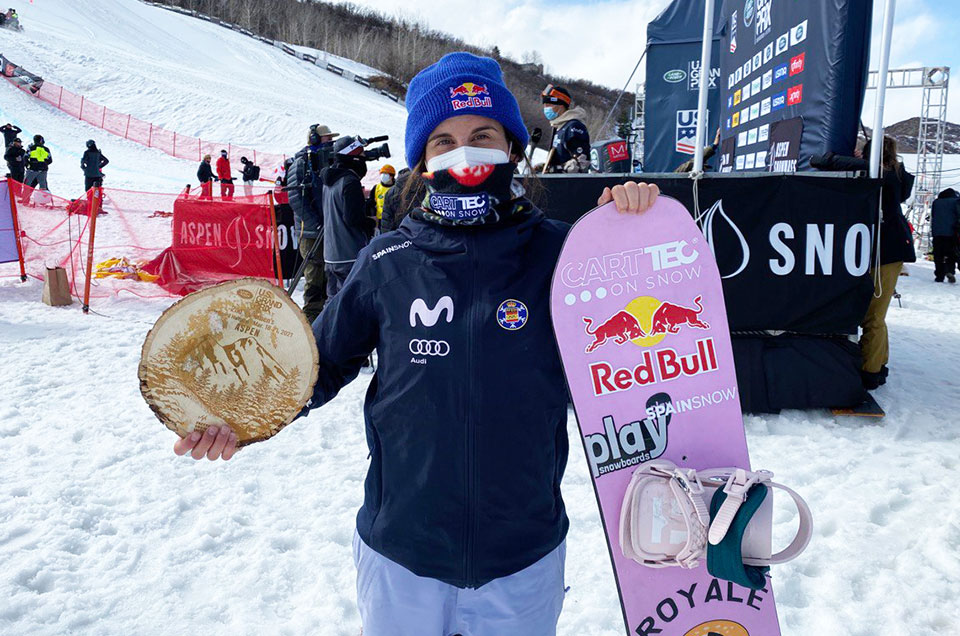 The RFEDI-Spainsnow rider closed the season in style with a round of 86.00 points at the final of the FIS World Cup in Aspen and the bronze medal for overall performance.

Only a week has gone by since she won the bronze medal at the Snowboard World Championships in halfpipe. This time, on the second and final round of the World Cup, also held in Aspen, Spain’s Queralt Castellet managed to pull off a complex round that earned her 86.00 points. A Backside 540 mute, Frontside 900 melon, Backside air to fakie taipan, Switch backside 540 mute combined with Cab 720 mute as only she knows how to do. Even the FIS commentators praised her: “Well done, Q.”,”¡Buen trabajo!”, they commented in Spanish in recognition.

“I am very excited about this score, as it is the result of a lot of hard work and effort in a very complex season. I’m very happy with the progress and how I’m performing as well as with my variety because I haven’t done the round same round twice in all of the events and I’ve been constantly adapting, changing routines and evolving in all the hits,” she confessed.

“I’m the only one who is doing something like this and changing and adapting is part of the quality of riding so this is huge for me,” she concluded.

Therefore, winning silver does not only give Queralt a well-deserved third place on the podium today, but an exit in grand style with a new medal; bronze in the FIS World Cup Circuit; as this last event has put the icing on the cake to this season which, unfortunately, has suffered the cancellation of three of its events.

This World Snowboard Tour comes to an end with only 4 of the usual 9 events being held: the FIS World Cup Laax Open and Aspen, the X Games Aspen and the FIS World Championships Aspen.

This victory is her fifteenth podium in a World Cup (six wins) and makes her the second Spanish woman to win the most World Cup podiums in winter sports, behind Blanca Fernández Ochoa.

At Carttec, we are proud that she gets to represent us, not only for the successes achieved, but also for being an international benchmark and representing values such as effort, work and dedication as the basis for success.